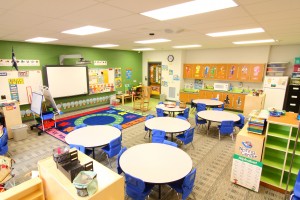 (YORK, SC) – The new renovations and additions to Harold C Johnson are complete – in just a few short weeks the school will open as an elementary school – a third life for the school since first opening its doors in 1950.

Harold C Johnson first served as York Centralized High School some 60 years ago; it later transitioned to serve as the district’s only middle school, and held that title for over a decade. That is one of the reasons this transformation so exciting for the district.

“I’m really proud of it,” said Principal Mark Hendry. “When the kids come in, they’re going to be excited that this is their new school.”

No doubt, the school’s renovations are refreshing. Modernizations included the demolition of one old wing and the construction of a new 17,000-square foot early childhood wing with 11 classrooms.

Within those enhancements, they were able to preserve and reuse some of the original features. One example includes the preservation of most of the former high school’s original slate floor – some of the slate was even used to make built-in benches throughout the school. The original gym floors have been refinished and the cafeteria brought up to date with fresh tile and bright colors.

The project is the final phase of a major York school district construction and grade level restructuring that resulted from a voter approved $85 million bond referendum back in 2007.

Brown recently commented on the success their district has had with general contractor for these referendum-funded projects over the course of the last few years.

“The Edifice team that renovated Harold C Johnson Elementary School has been nothing less than excellent. Our District has been so fortunate to have Edifice partner with us on this project.”

“Excitement continues to rise in our community as everyone awaits the opening of our newly renovated elementary school, said Brown. “We thank the entire Edifice team for the great work they have done in our district.”

Classes begin in the York schools Aug. 17, with teachers moving in to the new space this week.