City of Statesville breaks ground on the new Fire Station

(Statesville, NC) City leaders and fire department personnel broke ground for the new Fire Station One on Wednesday, November 30 at 2 p.m. The new station, located at the intersection of Wilson W. Lee Boulevard and Charlotte Avenue, will replace the existing station, and accommodate the City’s growing needs.

Construction of the 26,000-square-foot, 2-story fire station is set to begin once site work is substantially complete. The new fire stations will house administrative staff and other City departments on the lower level while the upper level will house the bunk rooms, showers, kitchen, training, and fitness areas for the fire staff. The Apparatus Bay will consist of 4 pull-through bays and 2 mezzanines that will provide additional storage and training needs. In addition, there will be a 3-story training tower on site, which will be utilized by the fire staff for various training exercises.

“What a glorious day for Statesville and her citizens!” says Statesville Mayor Kutteh “Once this new fire station is completed, fire protection, south of downtown will improve dramatically, while assisting other areas throughout the city. The Woodard fire station will be a catalyst for even greater things to come. Promises made – promises kept.”

The $10 million facility is estimated to be completed in February 2024. The design-build team for the new fire station is Edifice, LLC, and ADW Architects.

“Thank you to the City of Statesville and the Statesville Fire Department for choosing the Edifice-ADW team and our consulting partners McGill, Stewart, and Optima,” stated Michael A. Carlisto, Executive Vice President for Edifice. “It’s been a long time coming, but the ground is finally broken, and the progress has started.  Before long the City of Statesville will have a brand-new Fire Station and Headquarters. We are excited to be a part of your team and thanks for your faith and trust in Edifice and ADW.” 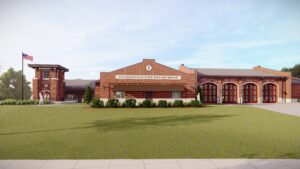 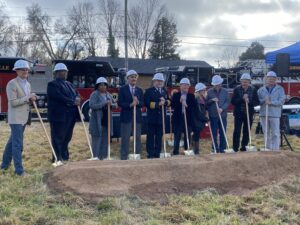