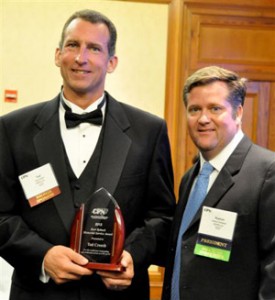 Tod Creech, Edifice, Inc. CFO was recently presented with the 2012 Kurt Ryback Memorial Service Award. The award, given by Construction Professionals Network (CPN), was presented at the organization’s annual conference and black tie gala in Hilton Head recently. CPN is a fellowship of select executives, public servants and professionals involved with design, construction and related industries. Created to facilitate the association of outstanding professionals in the industry, the group’s mission is to utilize the diverse group’s expertise for the members and community alike.

During the conference, Tod was recognized for his vital work over the last three years in serving as Treasurer for both CPN and the Construction Professionals Network Institute (CPNI) – whose mission is to further delve into key issues within the industry related to performance, economic development, and the advancement of members and the communities they serve. “I am extremely thankful to CPN for giving me the opportunity to serve on the board and develop many great relationships.” said Creech. “With so many industry leaders included in the membership of CPN, I am very honored to receive this recognition.”

Described as “extremely professional and accurate” by CPN President Peyton Fairbanks. Tod was praised not only for his dedication, but also for guiding CPN through some of the most treacherous of economic times. He was noted for his ability to translate budget and accounting procedures in a way all involved could understand.

“Our board had tough decisions to make,” described Fairbanks. “Tod’s recommendations (as treasurer) were spot on in guiding CPN towards financial responsibility.”

The Kurt Ryback Memorial Service Award is presented annually to a CPN member who has demonstrated outstanding, long-term contributions to CPN through participation in committees and leadership and shown consistent participation in CPN and CPNI events and programs.  Additionally they have taken on added tasks and responsibilities during membership in the association.  Kurt Ryback (deceased) was a founding member of CPN of NC.

Creech echoed his appreciation of the award in regards to Ryback’s influence within the organization. “Kurt Ryback meant so much to CPN, and was a close friend to many of our current members.”