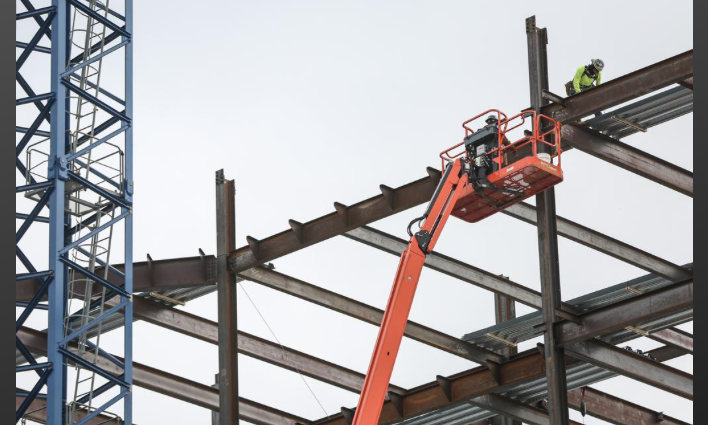 Cranes and construction crews are still largely in full swing in Charlotte, despite the earth-shattering impacts of the coronavirus pandemic across the globe.

The Queen City, one of the hottest markets for real estate development in the country, has enjoyed years of a building boom that has seemed endless. But while construction sites were still busy up until deadline for this story, that could all come to a halt pretty quickly.

If enacted, it would prohibit nearly all movement and activity, including at worksites, unless deemed essential by the government. Some construction sites could be exempt from the order, as in California, but it’s too soon to know what the rules may be here.

“If a shelter-in-place order comes down and it’s a government mandate, we have no choice — we would abide by the laws and do what we’re told,” said Gary Creed, chief operating officer at Edifice, a local general contractor. “Certainly, we would see an impact on the progress of the work.”

Edifice’s current projects include The Square at South End mixed-use development in Wilmore, the uptown Charlotte-Mecklenburg Police Department’s central division facility, the Memorial Stadium revamp and the last building at WestPark 85, which it’s finishing up on now.

Creed estimated, in general, anywhere from two dozen to 100 workers are on an Edifice site at a given time. He said the company has instated extra precautionary measures to keep workers safe and sites sanitary, including job-site training on social distancing and cleaning commonly used equipment more frequently.

Meetings with subcontractors and clients have moved from construction trailers to video-conferencing. Office employees are working remotely.

Josh McConaughey, vice president of the commercial group at JE Dunn, said its local sites — including the Grand Bohemian Hotel in uptown and the Apex SouthPark project — also remain active. Anywhere from 100 to 500 are employed on a job site at a given time.

Companywide, JE Dunn has instated specific protocols for worksites, such as extra cleaning and sanitation efforts, and social distancing. Employees in non-worksite roles, such as accounting and project management, have been asked to work remotely.

Otherwise, JE Dunn is also waiting to see if a shelter-in-place order is issued that would require a shutdown, McConaughey said.

Both McConaughey and Creed said their sites are working at full capacity right now and there hasn’t been any decline in the number of workers. In fact, Creed said, some crew members from sites that have shut down in places like Atlanta have come up looking for work on Edifice sites.

Of concern for general contractors is potential changes in building inspections, a vital step in any construction project. Mecklenburg County’s code enforcement office closed to the public yesterday but plan review is now electronic and permitting will continue “with very little change,” according to the county.

The county says field inspections will continue with “slight modifications” to adhere to social distancing. But contractors say they are worried about a steep slowdown or an outright stop in inspections.

If a shelter-in-place order is issued for Mecklenburg County, that would result in a huge amount of construction employees without pay until it’s lifted and work can resume. In the Charlotte region, about 87,000 are employed in the construction industry, according to the Charlotte Regional Business Alliance.

McConaughey said the fate of hourly workers will be up to the trade partners they work for. He said JE Dunn is in regular communication with those groups.

If a shutdown does occur, it could be difficult to get laborers who may go elsewhere for work back onto sites, especially in an already constrained market, he added.

Creed said Edifice as a company would be able to weather the storm but subcontractors would definitely suffer.

“My biggest fear is for the craftspeople out there that would not be getting a paycheck,” he continued.

For many in local commercial real estate, most are taking a “wait-and-see approach” for what the COVID-19 fallout could be on the industry.

It seems inevitable that a lot of deals, whether leases or investment sales, may get pushed out to later this year. But deals already in progress or in the pipeline are largely expected to move forward.

John Culbertson, managing partner at Cardinal Real Estate Partners, said in many of the transactions he’s currently working on, both parties are wanting more time.

“Lenders are moving forward when they’ve got term sheets out but they’re not quoting any new deals or any new loans,” he said.

But despite a slowdown in investment sales and lease deals (unless already in the works), some companies are needing short-term warehouse leases. Skibinski said he’s in talks with a major retailer looking for warehouse space in the local market after it closed its stores nationally because of COVID-19.

“A lot of these deals are not undercapitalized — people do not have to sell,” he continued.

Rob Pressley, president of Coldwell Banker Commercial MECA, said Tuesday the firm’s three local offices are still open for business. Several employees have moved to remote work but others, including Pressley, are still working in the office.

Pressley echoed other brokers, saying he’s working on plenty of deals that should still close.

“There are things in the pipeline that are too late to stop if they don’t have to be,” Pressley said.

That is, of course, unless a register of deeds office closes. Mecklenburg County says it will have limited staff onsite to record real estate documents, but attorneys may use e-recording with a county vendor instead.

Of the major asset classes, retail will likely be the worst hit. With Gov. Cooper’s mandate earlier this week ordering all restaurants and bars to close, except for delivery and takeout services, restaurants and retailers are having to lay off or furlough workers left and right.

Pressley said he has some retail clients, some of whom say they feel they can pay next month’s rent, but others worry even that won’t be possible. Retail landlords, especially shopping centers and owners with a heavy amount of restaurant tenants, will subsequently see a huge impact.

“I firmly believe some of this will have permanent changes in the way we do business,” Pressley said. “Some restaurants won’t reopen and some retailers won’t make it. I’m not sure that some (things) will ever go back to being the same.”

The amount of companies looking for architecture and engineering services is, inevitably, going to dip amid the current uncertainty.

Richard Cuebas, managing principal at F&D/Integra, said his company — headquartered in Puerto Rico, with a Charlotte office — is accustomed to doing some work virtually but much more of the firm’s business has gone remote in the wake of COVID-19.

F&D/Integra, which includes eight employees here and 60 in Puerto Rico, specializes in architecture and engineering, infrastructure planning and design, and construction management and consulting.

Cuebas said he believes the firm will manage fine through the next 30 days without major changes, although he’s already in talks with the U.S. Small Business Administration and his landlord. F&D/Integra acquired a company last year and is now looking to extend its line of credit from that deal. Cuebas said he plans to meet with his landlord about whether deferred payment or other options will be available.

Otherwise, the company is dialing back on daily expenses and monitoring the situation as it develops.

Productivity has been an issue as F&D/Integra employees move to remote work, Cuebas said, estimating that’s dropped 30% in the past week or so. Some of it is technology-related — architects and engineers are facing lags trying to access company servers remotely and to be able to use special software the industry requires.

Cuebas said F&D/Integra is considering putting employees on different shifts and workdays to mitigate some of the issues resulting from working on a laptop at home versus a more advanced computer in the office.

F&D/Integra has enough existing work to keep the business going, even with the challenges of remote work. But if strict lockdown measures currently in Puerto Rico are long term, or get implemented in Charlotte, that’s when the firm may have to reevaluate.

Instead of laying off employees, Cuebas said the company would first scale back employees’ schedules to more of a part-time basis. Already in the Puerto Rico office, the company has had to bring employees’ workdays to four instead of five.

F&D/Integra’s clients include businesses that have had direct, hard-hitting impacts, including fitness studios, schools and governments. Beyond the existing pipeline, it’s hard to imagine those businesses would require architecture and engineering services while being closed.

“You read about it and you see all of the figures and numbers and maps … but until you see that this case was in this apartment complex, (that’s when) it’s real and local,” Cuebas said. “It’s more than a global thing or something abstract — it’s real.”