“Many international companies don’t like the standard box building, so they want to build their own,” said Sven Gerzer, vice president of business recruitment for Europe, India and North America for the Charlotte Regional Business Alliance. “From a construction perspective, these are great customers because they want to build according to their exact specifications.”

“Many of the international companies Edifice partners with include both office and manufacturing or distribution components within a single facility. The inclusion of a flagship office or showroom component in the front a building, along with a more functional component as the back of house, sometimes differs from the approach taken by many domestic companies whose expansion is largely focused on boosting supply chain or manufacturing capabilities,” said Sloan Kormelink director of business development with Edifice. Pester pac automation, a secondary packaging company in the pharmaceutical and cosmetics industry chose this layout in order to showcase its brand and a location where the landscape had a natural feel. Currently under construction, Pester pac automation’s facility is surrounded by trees and includes a manmade water basin. German-based Bürkert Fluid Control Systems, a leading manufacturer of measurement and control systems for liquids and gases, also chose this route for its 168,000-square foot facility in Huntersville. The manufacturing portion takes up more than 100,000 square feet, while the front 68,000 square feet includes administrative areas, training facilities and an indoor fitness center. The company also selected a large site to support future growth with views of natural landscape. 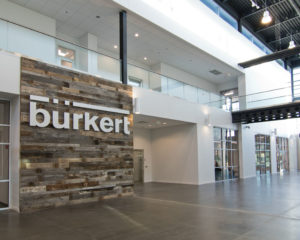 International companies often pursue a design-forward facility that include natural lighting, unique building materials, and an elevated demand for quality construction according to Kormelink. Additionally, they’re interested in sustainability and environmental stewardship during and after construction.

Kormelink said many international companies prefer to have a lot of natural light in their buildings, so an abundance of windows is a necessity, both for offices and manufacturing spaces.

“There’s a combination of many factors that lead to international companies choosing the Charlotte region,” said Gerzer. These appealing factors include:

Why one German firm chose Charlotte

Pester pac automation is relocating its North American headquarters from New Jersey to Huntersville and chose Edifice to construct its new building.

According to Ryan Braun, vice president at Pester pac automation, the company chose the Charlotte area due to its:

“We wanted our U.S. headquarters to align with our corporate identity,” said Braun. “We’ve positioned ourselves as a high-end, high-quality vendor, and we wanted our building to reflect that.”

Pester pac automation’s domestic headquarters, which will house both the company’s offices and manufacturing space, is a two-story facility on a 20,000-square-foot footprint on 9.7 acres in a pre-existing industrial park. It has obscure angles, a large angled roof and elevated office space over a man-made water basin, along with an outdoor employee area. “We had a lot of challenging build requests,” said Braun. In addition to requesting an abundance of natural light, Pester pac automation wanted to bring in a sense of natural elements. “From just about every vantage point in the building you can see trees all around us,” said Braun. “It feels like you’re surrounded by the woods, which is a unique perspective in an industrial space.”

In 2019, 17% of Edifice’s revenue was with international companies. Interest from international companies looking to build headquarters in the Carolinas remains strong. “We enjoy working on these projects because they have a positive impact on communities and the buildings are uniquely reflective of our client’s organization,” said Kormelink.