The Charlotte Business Journal honored local middle market firms for propelling the region’s economy. In honoring these companies, the Business Journal looked at companies with revenue of $50 million to $2 billion to see who had the fastest revenue growth and the most robust job creation numbers from 2015 to 2017.

“Charlotte-based general contractor Edifice Inc., which has a project portfolio that includes the RailYard in South End and the Warlick Family YMCA in Gaston County, posted the highest rate of revenue growth in the past three years of 146.2%.”

Edifice Inc. has enjoyed what Chief Executive Eric Laster described as “comfortable” growth. The company has kept to some of its core sectors, like building churches and schools, while also looking for opportunities to take on larger, more complex projects since the recession.

“I think when the switch turned on and the recession was over, and money started flowing again, that every market that we sell into became active — probably for the first time for Edifice,” Laster said.

Between 2015 and 2017, Edifice’s revenue grew 146.2% while its headcount almost doubled, from 65 employees in 2015 to more than 100 today. To accommodate that growth, Edifice in 2016 moved to a 20,000-square-foot building on South Boulevard after outgrowing its space at the former Coca-Cola bottling plant on West Morehead Street.

The majority of Edifice’s work is done within 125 miles of Charlotte. The company works in other markets like Raleigh, where Edifice is building a new broadcast campus for Summit Church. But Laster is considering broader expansion across the Carolinas.

Laster and other Edifice leaders attribute a lot of the company’s revenue growth to repeat business through sustained relationships with clients.

“During the recession, we didn’t ignore them just because they weren’t building,” said Bryan Knupp, senior vice president at Edifice. “We still stayed close to them and attended to their needs, no matter how small they might be, and I think they appreciated that and remembered us when the work returned.”

General contractors have been grappling with their own challenges — particularly a tight labor market and the rising costs of construction.

Edifice kept talented employees, even when work was limited. “It was extremely important to us, as we came out of the backside of the recession, to maintain our core employee base,” said Gary Creed, chief operating officer. “There was a period of time where we had a lot of people at home, but we kept paying their salaries and took great care of them, knowing that when this thing came out, everybody would be back at work and they’d be taking good care of us.”

Edifice initiates conversations early about realistic expectations for project pricing, even as it’s gotten more difficult to predict what construction costs will look like a year or more out, Laster said. For the first time ever in Charlotte, he said, there are too many opportunities for subcontractors, driving cost increases beyond inflation.

Being upfront with clients and transparent about those increases has been a key part of the business, he said.

But what Laster said he’s most proud about is staying committed to Edifice’s mission throughout its 40-year history.

“Our steadfast goal has always been to create client happiness and satisfaction,” he said. “I’ve always felt that if we can accomplish that goal, growth and opportunities will continue to come for Edifice.”

To read the full coverage of the Middle Market Leaders Event, click the link: http://bizj.us/1poody 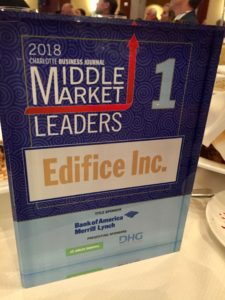 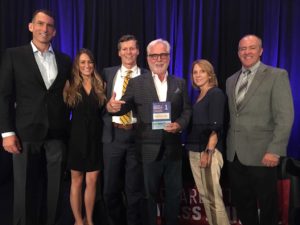