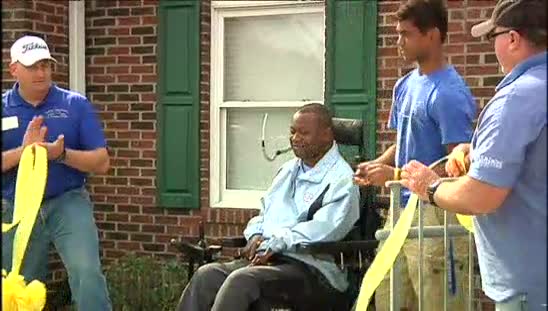 GASTONIA — The Society of American Military Engineers (SAME) and the Wounded Warrior program recently teamed up to make some changes to the home of Sgt. Kelvin Woods.

Edifice team members, along with military organizations and local businesses donated their time and resources to make certain the wounded Sgt.’s home would be wheelchair accessible.

Woods had served in the United States Army for 21 years. However, after leaving the base in 2010 one evening, he was involved in a tragic motorcycle accident that left him paralyzed from the neck down.

Though Woods was a drill sergeant at Fort Leonard Wood in Missouri, he moved to Gastonia to be closer to family. Though he had strong support of his family, getting around his home wasn’t easy.

All of this changed with the wounded warrior project.

“I feel great. There are some Americans out there that still take care of soldiers,” said Woods during the recent dedication ceremony of his renovated home.

“It gives me free access to get around in my own home. Before, I couldn’t even get around in this house so it’s a very big improvement,” said Woods.

Some changes made included replacing carpet with hardwood, widening hallways and building ramps.

Coordinator of the project, Cindy Zwolensky, said it over 1,300 volunteer hours to complete the renovations, but all involved were determined to make it happen.

“We were able to pull the community together and really get a lot of volunteers. A lot of materials were donated. A lot of people just wanted to help and it was a terrific project,” said Zwolensky.